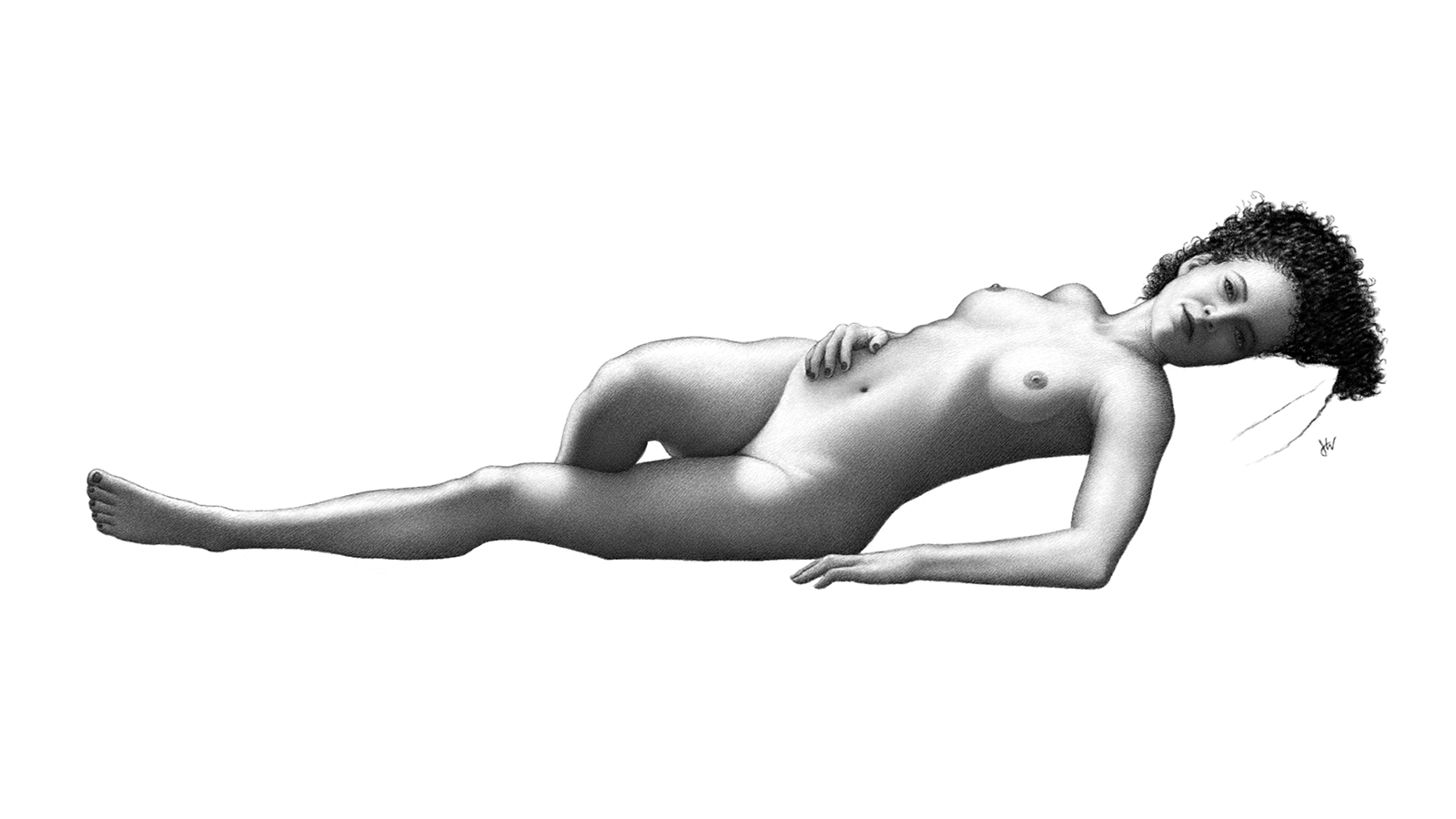 Lately, some of my male artist friends have been confiding to me that they are feeling like pariahs in the art world. And boy, do I get it. From my vantage point, I see that the general public’s taste for the Nude is souring. What I’ve been calling “The Great Nude” is simply not in tune with the times we live in. Galleries have been reticent to exhibit certain nudes, especially if the artist is a male.

Who can blame them. Female artists of every persuasion and nationality are entering the art market and promoted heavily by the galleries. It is the feminine point of view that is current now. These young artists are boldly exploring the expanses of sexual identity and cultural empowerment that men had taken for granted for centuries. What use do these new artists have for demure female nudes posing vulnerably for their male paymasters?

I’m a white male figurative artist of European decent, I offer no apologies. I was taught to use the visual language of the Renaissance like many artists from my generation. However, I concede that the white male European vision of the female Nude is no longer useful in our cultural dialogue. Whether painted on canvas or drawn on paper, The Object of the Male Gaze is being pushed aside.

Too many artists of previous generations were taught to see women through the narrow keyhole of the Male Gaze, which often presents the nude female demurely or sensually. We were assured that these iconic images of beautiful, young bodies would evoke feelings of Liberty, Truth, and Courage, even Justice! Armed with that moral cover, artists have for centuries pursued singular career paths, mastering mediums and techniques for rendering the female (or male) form beautifully, if not erotically, as a matter of course and good business.

In my 20’s, I learned how powerful The Nude could be when I exhibited my figurative works in public, down South in the 1970s. I was attempting to inspire dialogue and thoughtful reflection about the human condition. Ironically, many religious people were shocked, but at least they got it. They understood my work in the context of the Renaissance because it was familiar iconography. I was encouraged that visual art could still excite people.

When I moved to New York in the 80’s, it was to find my niche and get a gallery behind me. Back then, there were galleries that lived exclusively off the figurative arts and plenty of galleries willing to push limits. But many of those galleries dedicated to Nudes are long gone, and few are willing to risk offending potential customers these days. If you’re a Figurative Artist (or a gallery) using social media promote figurative works, you’ve learned how quickly your works can be censored. Frankly, I’m surprised that TheGreatNude’s Facebook page has been allowed to exist this long.

I’ve also represented artists through TheGreatNude’s exhibitions and events, and I see the trends from the collector side. The types of male collectors who drive the sales of these kinds of art works are dwindling, while more and more talented artists enter the marketplace. Without enough galleries, all of these fabulous Nudes have to be promoted online where they compete for attention, but end up buried under a sea of pornography and erotic images. People are looking at lots of images, but no one is buying like this. I have many friends who have lost their galleries in the last decade, and I know some previously very successful male artists with masterpieces stacked up against walls, unsold and gathering dust. It’s looking more and more like a bleak Darwinian process that will eventually cull a very large herd.

Recently, I’ve been asking myself this question before I review an exhibit or produce a new video for TheGreatNude.tv: What does this Artist have to say that adds to the cultural dialogue? Years ago, I believed in the healing powers of Figurative Arts, because I thought every culture could understand the body language we artists harnessed to communicate ideals we shared in common. Trying to create a “Great Nude” – a work of art that captures the public’s imagination, like Michelangelo’s David or Manet’s Olympia – seemed possible, necessary even for humanity to see the best of itself. But I realize now that this language is nearly a lost one, practiced by a few hardy artists, and supported by just a handful of galleries.

As I look around me at the global chaos, I wonder if there is even a place for the archaic idea of a “Great Nude”. Is there a Nude to represent the two sides of a cultural tug-of-war between conservative and progressive forces? Can a Nude bridge the cultural divide between the West and the Middle East? Who are we kidding? The only intellectual argument I have for works that promote this ancient language is to feed into the marketplace of kitch artworks, which I have tried as well.

The community of figurative artists I know here in NYC is hanging in there, creating beautiful masterpieces for humanity to consider, if only for a moment during an art opening or perhaps eventually on the wall of a wealthy collector. They are hoping for trends to change, tides to turn. As for myself, after 10 years promoting the Nude, I am taking a break from this mission to support the Figurative Arts. I’ll be working on other visual languages this summer: landscapes, portraits, doodling, any kind of art that doesn’t have all that European male baggage attached to it.

Jeffrey Wiener is an artist, designer, entrepreneur and publisher of www.TheGreatNude.tv, a figurative arts video magazine with a YouTube channel followed by over 28,000 fans and over 20 million video views. He recently departed New York City and now divides his time between South Florida and upstate New York. His artworks can be viewed online at www.JeffreyWiener.gallery 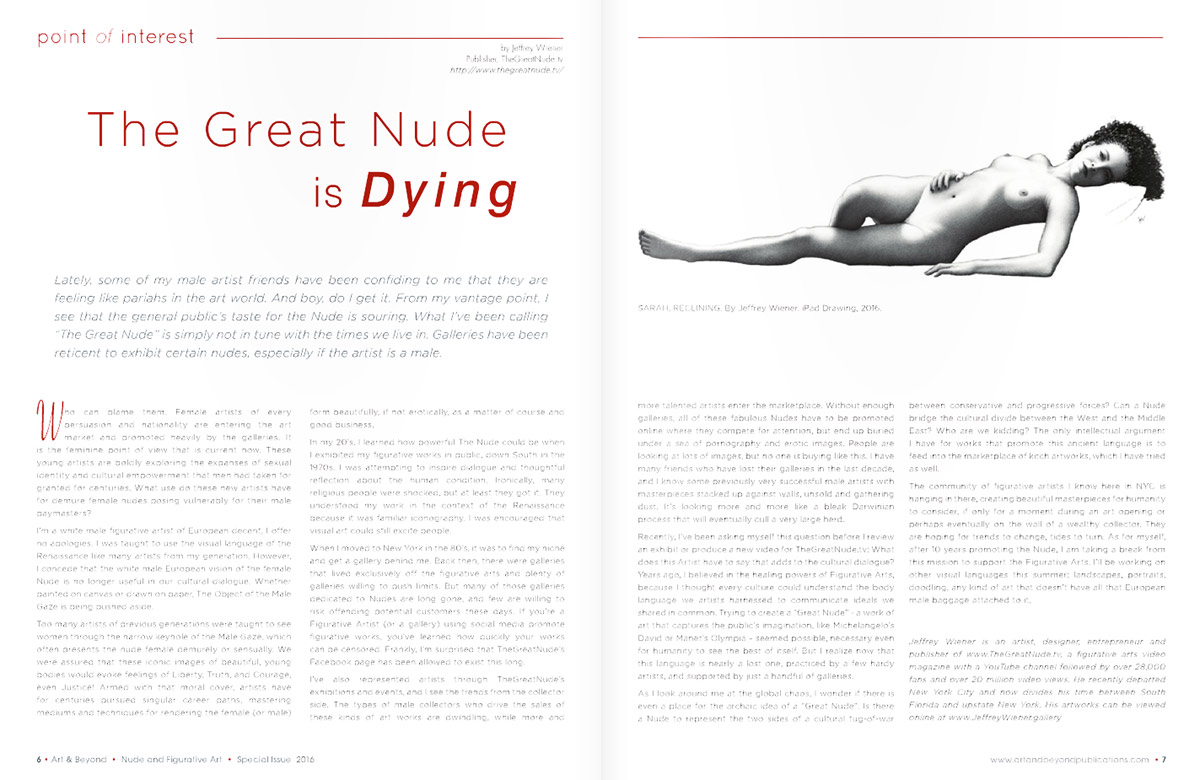