In the series of works entitled “TV Series”, Jeffrey Wiener explores the relationship between humans and the television screens that connect them to the outside world. Televisions allow individuals to disconnect with the ones they are with, and reconnect with an Other that is accessible through the screen. This is an optical illusion, which provides a false sense of intimacy with that Other, and fosters a belief in a false alternate reality.

These paintings, drawings, and a 2 1/2 minute animated video capture a sense of anxiety and paranoia that was palpable and real during the years of expanding Terrorism and social upheaval of the first and second attack on the World Trade Center on the southern tip of Manhattan (an island). The artist, living in New York City during much of this time, experienced these events first-hand, particularly the second attack on the World Trade Center where he was present, and continues to explore this theme in numerous works – still to be finished. 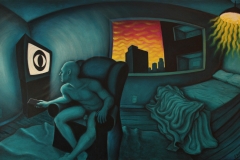 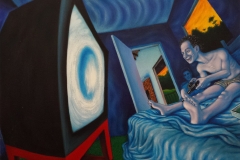 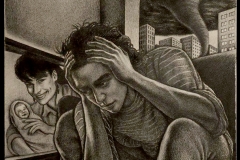 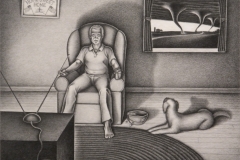 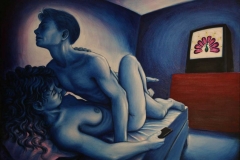 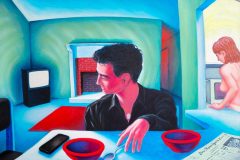